"The issue is not to remove the individual tyrants like Ben Ali, Hosni Mubarak, King Abdullah, Asif Ali Zardari or any of the other Muslim rulers while the very system that they govern remains alive and well. It is rather the man made systems that they govern; the very system that produces such tyrants. For the past 90 years, the Ummah has tasted the bitter fruits of nationalism, communism, democracy and dictatorship. Now it yearns for the sweetness of Islam."Hizb ut-Tahrir (America) comments on the  Egyptian intifada

The world has witnessed an eruption of unparalled magnitude in the Muslim world over the past two weeks. Muslims the world over from Pakistan, to Tunisia, to Egypt, Yemen, Palestine, Jordan and even Albania have showed their utter mistrust and disapproval of the tyrant rulers imposed upon them. The demonstrators have shown great courage inspired by the Muslims of Tunisia. These demonstrations have erupted from the frustrated hearts of the Ummah and are a sincere display of the Islamic sentiment. Indeed, the videos from Cairo are riveting, with masses of Muslims flowing from the masajid after Friday prayer and overwhelming security forces. As a clear sign of the goodness of the Ummah, the world is witnessing the riot police allowing the Muslims to perform the Isha prayers in the streets; an indication that the very security forces that repress the Ummah are the same ones who will protect and defend it when its Islamic sentiment is evoked.
Continue reading>>
Projected by Freedom Writer No comments:

Do UN resolutions have no takers in Kashmir? 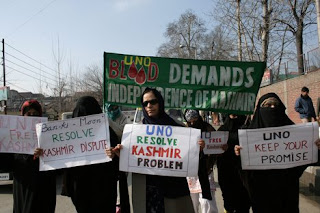 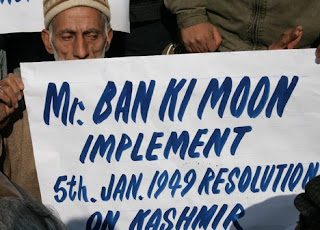 This refers to a news item “UN resolutions have few takers in JK: interlocutors.” This is an eye opener for Kashmiris in general and the leaders of the present movement in particular. This statement is indicative of the mindset and the motive of the interlocutors and their sponsors: Government of India. They appear to be working strictly in accordance with the instructions of New Delhi by issuing a few favourable statements to cool down the tempers and subsequently pursue their agenda of diverting the people from supporting the movement. The only thing GoI has been serious and fast about was appointing two high powered committees for Jammu and Ladakh province to look into their grievances regarding development. They give an impression that as if more than 100 innocent and unarmed young Kashmiris had laid down their lives for the development of Ladakh and Jammu. The interlocutors are talking about improvement in Governance and Development and ensuring some basic rights to the people as if these are the issues for which Kashmiris have been fighting for the last 63 years. The irony is that every agency in India or Kashmir and the interlocutors and political parties are talking about measures to be taken to bring peace back to Kashmir and no one is talking about the political resolution of Kashmir issue. Some leaders or parties talk about the resolution within the parameters of the Indian constitution which is not what people want. They should know that even if peace returns to Kashmir for some time, it would be temporary and should not be construed anything else.  It is not known how the interlocutor’s arrived at the conclusion that people of Kashmir are not in favour of settlement of Kashmir problem in accordance with the UN Resolutions. If they want to ascertain truth, let them hold a referendum. Projected by Freedom Writer No comments:

By: Irfan Kashmiri
A pal of gloom and desolation is evident on the faces of people of IHK every year on the eve of India’s Republic or Independence Day. There is an unusual and manifold increase in the number of troops on such days. Police personnel gear-up for surprise frisking and checking of people and households across the Kashmir Valley in the name of so-called security ahead of India’s Republic Day, celebrated every year on26 Jan. Dozens of checkpoints are also erected in many areas of valley mostly in Srinagar wherein the pedestrians and the vehicles are being subjected to unnecessary thorough checks resulting in wastage of time of common man. This is what is expected of a brutal imperialist regime: terrorize and create a sense of fear among the innocent people so as to suppress every such voice which demands right to live as a free nation. How long will this bloodshed continue? Kashmiris on both sides of the Line of Control and world over observe India's Republic Day as Black Day, to attract world attention to the urgent need of addressing the Kashmir dispute in accordance with Kashmiris' aspirations and UN plebiscite. Can we do it this year??? 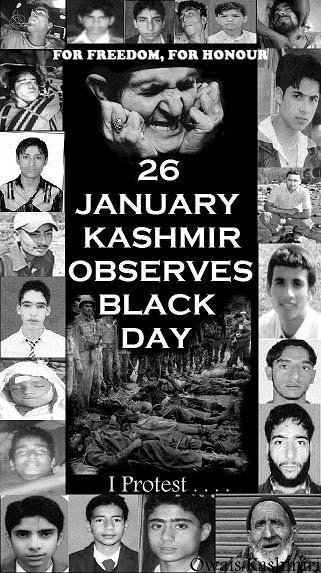 By: Kasheer Koshur
"I wish that people of india ask BJP (who are all time ranters of Atoot Ang) why they need to hoist indian flag in Territory of Kashmir..??
It clearly seems that they are themselves not sure of integral part theory..!! Thats why they need 50,000 indians in addition to 900,000 indian troops to hoist a flag..!!"
By: Mehdi Siddique
"Can a kashmiri forget the brutal death of nearly One lakh Kashmiris, the molestation of over nine thousand kashmiri women, the orphanage of over 100 thousand Kashmiri children and the tears of countless Kashmiri widows? If No, then the spirit of Azadi can never die. It is this spirit which encourages a common kashmiri to face bullets without any weapon, and it is this spirit which challenges the might of ‘mighty’ India and it is this spirit that will lead Kashmir to its Azadi. The ideology which bravely declares ‘Kashmir belongs to Kashmiris’ can’t be suppressed ‘by any means’. India has failed to integrate Kashmir from past 63 years with itself, and today when it is deemed to be the future ‘Superpower’, it is failing itself again."
From Jan.1989 to December.31 2010
Total Killings
93,544
Custodial Killings
6,982
Civilians Arrested
118,874
Structures/Destroyed
105,901
Women Widowed
22,749
Children Orphaned
107,400
Women / Molested
9,987

Projected by Freedom Writer No comments: 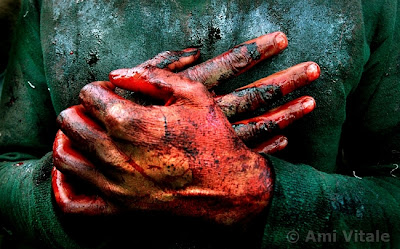 January 25, 1990: 26 civilians were shot dead in Handwara town of Kupwara district. The township was set on fire by BSF after the latter was panicked by a bang. Some of the slain persons including women were roasted alive. Freedom Writers pays tributes to all those innocent tender souls who have laid their lives for the cause of free Kashmir. GO INDIA GO BACK
Projected by Freedom Writer 1 comment:

The rule of Deception: Avenging Kashmiris!

"Kashmir's freedom struggle is essentially a war between a section of society who thinks it has the right to rule in what ever fashion it chooses over all other people and those who think that all are equal and righteousness is what differentiates between people." Mehdi Siddique has his say 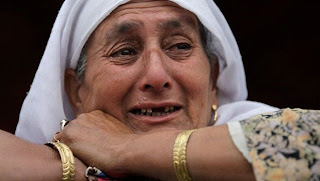 No nation in the entire world, in the entire history has been enslaved by foreign forces for such a long period of time as Kashmir. It has been over one thousand years that this land of Kashmir is witnessing tyrant oppression, a rule of brutal regimes and barbaric rulers. Those having a good insight in Kashmir’s history would agree with me that this is the land where the ‘cruel as death’ Huns ruled in the early sixth century; brutal “Unmattavati ruled in eight century and administered torture by the use of arm splitting, by the throwing of daggers which plunged into the hollows between the breasts of naked women, he then ripped the abdomens of the pregnant women apart to see their foetuses” (Majid Siraj: Kashmir Desolation or Peace). Despotic Harisha ruled in the tenth century who would plunder the wealth of commoners and subject them to huge taxes. And then the ‘Paradise on earth’ also witnessed the loot and arson of the Ferocious Tartars in the twelfth century who took with them fifty thousand slaves, nevertheless they perished in a blizzard crossing the Devasar pass to Mongolia alongwith all wealth and slave people. And we also remember the Afghans who invaded in the eighteenth century and raped and killed like lunatics. Then the Sikh governors in the nineteenth century who treated the people in Kashmir as little better than cattle for we know that the population was reduced from 800,000 to less than 200,000 in their barbaric regime.
Continue reading>>
Projected by Freedom Writer No comments:

Jagmohan was appointed on January 19, 1990. That night, in response to the kidnapping of Rubaiya Sayeed and other militant attacks, Indian security forces conducted warrantless and thus illegal house-to-house searches in , hunting for illegal weapons or other evidence of support to the militants. They dragged many people out of their beds into the bitter cold. Many Kashmiris complained that they were beaten and abused.Jagmohan maintains that he had nothing to do with the decision.
The next morning, as word of the searches and beatings began to spread, people began to pour out into the streets of . From the mosques, loudspeakers urged Kashmiris to come out and fight for azaadi, or freedom. Thousands of Kashmiris gathered to protest the actions of the security forces.
The state government declared a curfew, but few if any Kashmiris observed it.It was early evening when one group of marchers reached the   on 's . They were shouting slogans and some were pelting the soldiers with stones. Troops from the Central Reserve Police Force (CRPF) opened fire into the crowd. Eyewitnesses say the shooting was a brutal and excessive use of lethal force against demonstrators. Many demonstrators were shot from behind as they turned to run away.Kashmiri news photographer Meraj-ud-din described the scene:
"When I reached Gaw Kadal, all I could see were the dead. I saw bodies of children, bodies of women, bodies of men.... Later they brought the bodies to the police compound. I saw them again. There I cried. I shouted, screamed. 'Don't do this to the people.' That day I saw everything."
Human Rights Watch, in its 1991 report on the shootings, criticized the killings and concluded that the use of lethal force was not proportional to the threat. 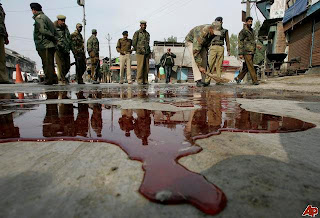 SENIOR Indian officials yesterday admitted that members of the paramilitary Border Security Force went on a 'shameful' rampage of killing in the mountainous north-west state of Kashmir on Wednesday.
The state governor, Girish Saxena, has ordered an inquiry into the security forces, who set fire to hundreds of shops and houses and allegedly massacred more than 55 Kashmiri civilians in revenge after separatists ambushed a military patrol. The incident is one of the worst atrocities by Indian paramilitary forces in their attempt over the past three years to crush an uprising by Muslim militants in Kashmir.

All views expressed in this blog are completely the author's own. Freedom Writers may not necessarily subscribe to those views. Our aim is to provide a free, unbiased platform to all people of Kashmir to express their views.